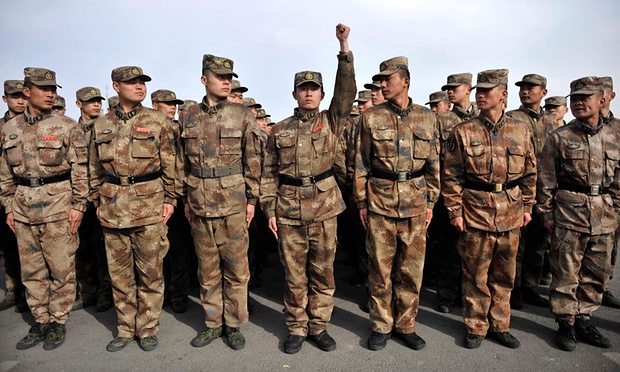 Chinese military leaders have declared war on smelly feet as part of a mission to free soldiers from the perils of bunions, corns and athlete’s foot.

For decades “liberation shoes” have been the footwear of choice for Chinese troops, and Beijing has deployed army personnel to the steamy jungles of Vietnam and the heights of the Himalayas wearing the canvas boot.

But over the years the dark green camouflage shoes lost their shine and “began to lose favour due to bad ventilation leading to foot odour”, Chinese state mediareported in 2010.

Now, their days appear to be numbered following a report that members of the People’s Armed Police (PAP) – a paramilitary force used for domestic security – is being equipped with newly designed footwear that leaves them “less vulnerable to foot-related diseases”.

The replacement shoes are “anti-bacterial, anti-fungal and odour resistant,” boasted Man Xiangdong, the officer who helped design them, adding that they also offered better support for soldiers’ ankles.

Li Zhixiang, a member of the PAP, which is estimated to have more than one million members, said the new shoes had dealt a body blow to bromodosis.

“Since we’ve had these new trainers the smell of feet has completely vanished from our dormitory and our athlete’s foot has improved,” Li told the group’s official website. “They are also fashionable and go with different clothes.”

The black shoes, which military scientists have spent two years developing, will be rolled out just in time for a high-profile military parade scheduled to take place in Beijing on 3 September.
Officially, the march is designed to commemorate the end of the second world war and to remind the world of the millions of Chinese lives lost in the war effort.
“Forgetting history is a betrayal,” China’s president, Xi Jinping, said earlier this month.
But observers say Beijing also hopes to send a message about the growing might of both China’s military and of Xi himself. Experts increasingly refer to the Communist party chairman as China’s most formidable and authoritarian leader since Mao.

Even after the shoes are completely decommissioned they are likely to live on, having reportedly made a comeback among civilian fashionistas. “Matched with a sailor’s striped shirt and navy blue pants they create a stylish look that is full of nostalgia,” the China Daily has claimed.