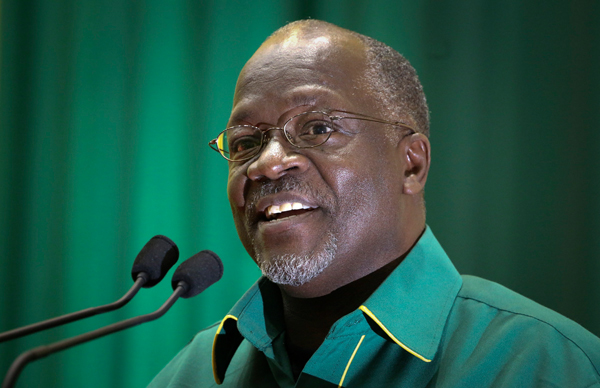 Magufuli, 55, was chosen over Justice Minister and former United Nations Deputy Secretary-General Asha-Rose Migiro and African Union Ambassador to the U.S. Amina Salum Ali, according to state-controlled Tanzania Broadcasting Corp. television, which followed the voting live from the country’s legislative capital Dodoma. Magufuli obtained 87 percent of the vote, CCM said on its Twitter account on Sunday.

Magufuli is seeking to replace Jakaya Kikwete, who will step down after his second five-year term expires in October. Tanzania has held regular elections since the formation of its union with the semi-autonomous archipelago of Zanzibar in 1964, with CCM dominating governance of the nation. Some of the other political parties include Chama Cha Demokrasia Na Maendeleo, or CHADEMA, and Civic United Front.

CCM’s Central Committee, comprised of party elders, selected five candidates from more than 34 who had put themselves forward, before the National Executive Committee reduced the short-list to three and members of the National Congress, the party’s top decision-making organ, cast their votes. Foreign Affairs Minister Bernard Membe and Deputy Minister for Technology January Makamba were among the top five candidates.

Tanzania’s economy, East Africa’s second-largest after Kenya, is forecast to expand 7.2 percent this year compared with 7 percent growth last year, according to the International Monetary Fund.