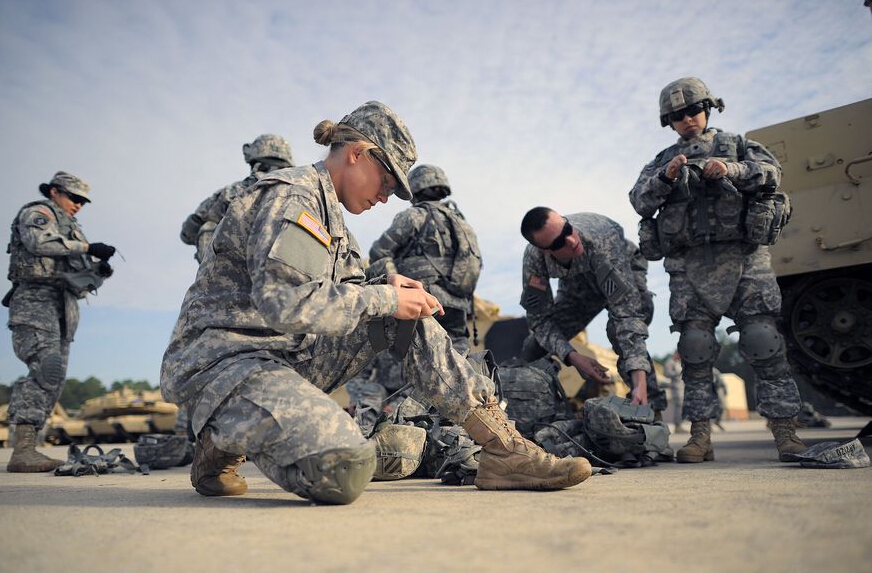 Congress is prodding the armed forces to come up with a special line of women’s combat boots,
in different styles, as studies show that military women are more susceptible to stress fractures
from marching and training.
Female troops in Afghanistan have complained to a member of the House Armed Services
Committee that they have limited options for acquiring combat boots designed for them.
The congressional move comes as selected women have undergone direct land combat training
to determine if they can meet tough physical standards to become an infantryman or a commando.
Defense Secretary Ashton Carter predicts that he will open most, if not all, such units to women
by Jan. 1.
On the eve of such momentous social and battlefield change, Army women lack boots specially
designed for generally smaller and narrower feet, say 10 congressional sources. The Army buys
different boot styles for hot and cold weather, mountain and desert warfare and the rain.
Prompted by the Obama administration’s 2013 decision to strike down a ban on women in direct
land combat units, a new report by the Armed Services Committee on fiscal 2016 spending says
it’s time to feminize the combat boot to increase performance in marches, long hikes and combat.
A spokesman for Rep. Niki Tsongas, Massachusetts Democrat and sponsor of the footwear
provision,said the Army does not provide “a female option for combat boots.”
“The congresswoman’s provision, however, encompasses all the branches by requiring the DOD
to examine its ability to provide women-specific combat boots across all branches and devise
a strategy to ensure that women are outfitted with the best combat footwear possible,” said
spokesman Michael Hartigan. “A major part of that strategy will be an analysis of the adequacy
of any female-specific combat boots that may already be available.”
Army public affairs did not respond to queries.
The congresswoman heard about the boot gap from female soldiers while on a visit to
Afghanistan.
“The committee believes it is important the Department of Defense ensure that female service
members have equipment and clothing tailored to the physical requirements of women in order
to operate effectively and not be hampered by equipment that is ill-fitting, uncomfortable, and
potentially harmful during operations in the field,” says the committee report.