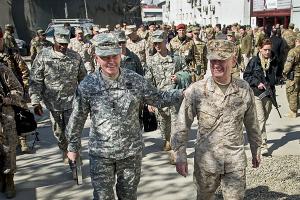 Amidst widespread criticism as to why U.S. soldiers still don the tri-color Universal Camouflage design pattern, which is largely believed to be inefficient, the results of a camouflage melioration program are set to follow an overhaul of the Army’s camouflage strategy. New uniforms are to be introduced and are earmarked to feature the Marine Corps Desert & Woodland patterns.

The move comes nearly an entire year after the completion of the extensive camouflage improvement program, which ran over a period of four years. As far as the delay goes, a number of factors are to blame, including the large-scale cuts in defense spending, as well as pressure to phase-out service-specific camouflage patterns, emanating from the Congressional ranks.

That concludes just one part of the camo-overhaul strategy though, with the other part also focusing on the prohibition of large-scale adoption of individualized military service uniforms (in exception to specified limited circumstances). One of the finalist camo pattern-designers, Crye Precision, is under serious consideration to provide the final replacement for UCP, particularly as result of the pattern’s consistent performance during testing. Crye Precision’s MultiCam was selected to be worn by soldiers deployed in Afghanistan (2010). Army officials regard the sum of $24,800,000 in royalties a bit too steep for MultiCam’s use though, according to an Army insider at the heart of the program. As a result, officials are exploring plans to create a digital pattern comprised of the color schemes made use of in MultiCam, as a possible alternative.

Pending positive results, the digital pattern would be implemented as the primary camouflage pattern for the Army’s training, garrison and actual deployments, according to the source. This would also result in Army personnel transitioning to the olive tan military boots worn by the USMC.